What Motorcycles and Ranch Dressing Have in Common

What Motorcycles and Ranch Dressing Have in Common They both require a helmet.
Both are necessary for rockin’ birthday party.
Wearing either makes a unique fashion statement.

None of these are the correct answer, although I really appreciate your unique sense of reality. How do you function in normal society, again?

Yesterday, I decided it would be really fun to have a total emotional breakdown in the church parking lot. I didn’t have to do it alone, though, since Kyle was out there for his mid-church Dr. Pepper fix. He says it takes the edge off of Elders Quorum.

The basic tenet of my breakdown was something like, “I don’t know if I’m a good enough writer, I feel like a terrible mother, I didn’t have any breakfast, and I want to eat a chocolate cake RIGHT NOW!!” Not overly logical, mind you, but very viscerally real to me at the time.

This made Kyle remind me that I haven’t really been taking very good care of myself over the past two days or so. I am pretty sure I have eaten at least a dozen oatmeal cookies (They ARE made out of oatmeal. That’s healthy, right?), spent about 12 hours sitting in the sun, and slept about 5 hours each night. If my mother actually ever read my blog, she would be yelling at her computer screen right about now.

This is when I realized that I have a horrible tendency towards self-destruction. “Self-Destruction?” you say. “Who would want to destroy themselves?”

Yes, people. We all want to destroy ourselves in some way. This is the reason why stiletto heels, vodka, and Donut Burgers exist. There is a little part in every single person that’s like, “Sure, it’s not good for me, but I’m dying anyway.” The delicious taste of deep-fried regret.

I hear you. Some of you say things like, “Yeah, but that’s not what I do! I didn’t buy my motorcycle because I wanted to have a permanent gravel tattoo on my ass.” Of course you didn’t. But, what would the fun of having one be if that wasn’t always a possibility? See. Even though destruction is always imminent, we love to put ourselves in situations where it becomes much more likely. It makes us feel invincible. It is also the reason people look into websites such as cleanharleys.com and many others to buy motorcycles. Any sane person would look at an open vehicle that can reach speeds of 200 miles per hour and say, “Wow. That’s incredibly dangerous. Not a good idea to put my skull and body parts close to it.” Still, lots of people buy them once they have considered the motorcycle insurance cost. Even more people USE them and then get splattered on the road.

For me, it is about Ranch salad dressing. I know that fat-free Ranch exists. Guess what? I STILL get the fat-full Ranch every time I buy a salad. If I could have a dollar for every time I said, “No, no. I want the stuff with the fat added,” I would have at least enough money to buy 10 Hot n’ Spicy McChicken sandwiches and then crap my guts out for the 80th time. See? It’s bad for me, but I still love it. Last thought:Why do we do it? Is it some hedonistic response that we just refuse to ignore? No. I think it has to do with that idea, the thought that we have no control over when and where we get off the crazy-train of life. I think, for many of us, it makes us feel a little bit better that we are doing something proactive about it instead of letting it sneak up on us like a burglar in the night.

I used to have a student who smoked like a chimney. When I asked him why he didn’t stop, he told me the typical responses: I don’t want to, I’ve been smoking too long, All my friends smoke, yada-yada-yada. When I said I worried about him dying young he said, “Everybody dies. At least I know how I’m gonna go.”

Do I eat too much cookie dough because I want to die? I think that is a little extreme. But, I think there is definitely a part of me that is nervous about how this ride is going to end. It makes me worry that I don’t have control over such a huge part of my existence. I think I do things in my life that aren’t good for me, not because I want to die, but because I want to remind myself that I’m still alive. I guess that’s not self-destruction, it’s self-discovery.

Well, then, bring on the ranch and the cookie dough. It’s time I took a motorcycle ride. 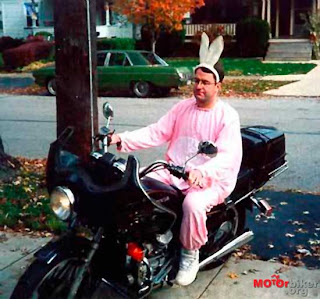