I have been a Mormon for quite a while now. There are many things about it that I enjoy. For instance, I love that I can go to any church in any part of the world and know that I’ll always make it to church about 5 minutes after the sacrament has already been passed. There will always be a child in the pew behind me that crawls underneath my feet to say “Hi!” Most talks will begin with a joke about how the speaker tried desperately to get out of it (which everyone will kindly laugh at).

As the love of God is unchanging, so are a few things about Mormons. One of these is the frantic use of Mormon swear words. You think you don’t know what I’m talking about? Oh, yes. You do.<

Many of you are now thinking of your favorite Mormon swears right now. For those who are still uninitiated, I will remind you of some of the most endearing Mormon curses so you can try them on the next guy who cuts you off in traffic. Then watch him run into a light pole out of pure gobsmacked-ness.

As you can see, this is not an extensive list. There are quite a few other good ones that I found on the internet such as “Jumping monkey nipples,” “Poop on a biscuit,” and “Son of a motherless goat.” (Mad Mormon props to The Three Amigos for that gem)

So, what is the point of all this?

Every culture has a defined set of appropriate and appropriated words. There is a reason that white people don’t use the word “Nigga,” although many black people feel comfortable with it. There is a reason why gay people use the word “Fag” although many other people wouldn’t. Words have a lot of power, and it is up to the culture that you belong to how you will use that power.

I find it interesting that Christians generally, but Mormons specifically, have decided that they retain their power best when they refrain from swearing like everyone else. Why is this? Who spoke from heaven 2000 years ago and said in a booming voice, “’Shit’ is a naughty word.” I find it hard to believe it happened like that.

Instead, I think it was much more Puritanical in nature. The whole idea of becoming like God is to repress the natural side of man. Hence, we shouldn’t talk about it, at least not in a vulgar way. We can’t talk about defecating or fornicating unless we use those very Latin terms for those acts. Otherwise, we would be calling them, uncomfortably, what they are: visceral human experiences.

The problem is, the world has taken a particular set of words and made them “dirty.” These words represent a connotation that is sullied, imperfect, and dark. This doesn’t appeal to a lot of people all the time, so we segregate those words in our vocabulary as bad. The word itself is a combination of vowels and consonants. It’s the emotional meaning that makes the word beneath us to use.

And so we replace the word with something less foul, less offensive to our sensibilities. 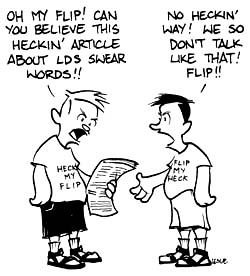 I’m not saying this is right or wrong. I do it just as much, if not more, than the next person. I just wonder why I do it. I have this feeling it is akin to seeing those commercials for starving children in Africa, which I usually turn off as soon as they come on. I happen to know that there are ugly things in the world. I just don’t want to be reminded of them if I don’t have to be.

Am I guilty of white-washing my worldview? Probably. Have I chosen ignorance instead of the stark darkness of reality? Yes. A lot of people would look at that and shake their heads at me, totally disgusted. “How can you choose not to see the ugliness in the world?” they would say. “You aren’t being honest about the way things really are.”

On the other hand, I believe that the universe is individualized. My perception of reality is totally different than yours, which is different than her, and so on. In my existence, I am still only about 12. I still like to climb trees, look at rainbows, and dance around naked in my house (if I can get away with it). What use do I have for seeing the darkness in the world? I will not flinch from it when I can make a difference, but I won’t seek out the negative elements that would cause my spirit to grow up more quickly than it needs to.

And so, I justify my use of Mormon swear words. Yes, I know they are a lot like real swear words, but not as dirty. Yes, I know people laugh at me for using them. Yes, I know that it would probably be cooler to be able to use them effectively when I want to quit a job that has really sucked. It’s pretty hard to express gravitas by saying, “You can take this job and put it in your piehole.”

Still, I believe that swearing like a Mormon gives me the best of both worlds. When I stub my toe, I can easily use “Fiddlesticks.” It’s really not that important. For those other things, the darker things of the world, the words come as they’re needed. Usually, the best words in those cases are not curses, but blessings.